The abuse has provoked concern and alarm in the Canadian news media and Parliament.

“This is an organized campaign to threaten and intimidate journalists into silence and undermine the freedom of the press in Canada,” said Brent Jolly, the president of the Canadian Association of Journalists (CAJ).

On August 11, 2022, several news organizations — the CAJ, The Hill Times, the Toronto Star and Global News — signed a letter after three journalists — Saba Eitizaz, Rachel Gilmore and Erica Ifill — received rape and death threats. The organizations sent the letter to the Ottawa and Toronto chiefs of police to demand action.

In The Hill Times, Mike Lapointe reports. The story is behind a paywall:

The Hill Times editorializes. The opinion is behind a paywall:

In the Columbia Journalism Review, Anne Helen Petersen comments in the winter 2018 issue of the magazine:

Code of Silence Award for Outstanding Achievement in Government Secrecy

The Code of Silence Award for Outstanding Achievement in Government Secrecy is awarded annually to call public attention to governments, government departments and agencies that distinguish themselves by denying public access to government information to which the public has a right under access-to-information legislation.
Freedom of the Press, Access-to-Information 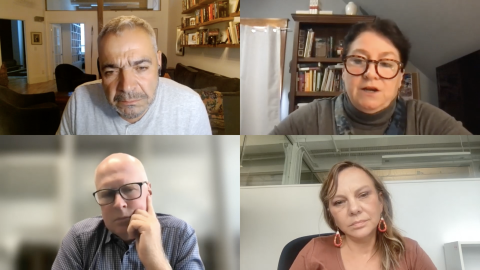 Julian Sher, an award-winning TV documentary writer and director, journalist, newsroom trainer, and author, has joined the Centre for Free Expression (CFE) as a Senior Fellow. “Julian Sher is a remarkable journalist, author, and newsroom trainer,” said James L. Turk, the Centre’s director. “The scope of Julian’s work and his achievements are exceptional.”
Freedom of the Press