A recent bombshell of a book about the corporate capture of Alberta’s energy regulator sheds light on how private organizations and public institutions sometimes converge into powerful networks that disseminate misinformation. The peer-reviewed book elucidates the inner workings of this phenomenon by developing an approach to analyzing institutional influence and dysfunction that can be used by investigative journalists, scholars, and anyone else opposed to abuses of state and corporate power.

In Hidden Scourge: Exposing the Truth about Fossil Fuel Industry Spills, Alberta-based ecologist Kevin Timoney details the many serious inaccuracies and omissions marring a database of spills kept by the Alberta Energy Regulator. As I outlined in Canada’s National Observer, Timoney found that all aspects of the regulator’s data necessary for gauging the spills’ impacts are flawed. For example, the regulator’s database over-reports how much of a spilled substance was recovered while under-reporting how many spills have occurred and the volume of the spills. The database also routinely fails to record the environmental damage wreaked by the spills as well as the death and injury that they caused among wildlife, Timoney concluded.

As part of this investigation, Timoney synthesized scholarship, intel from anonymous sources, and mounds of other research to explain the underlying causes of the regulator’s dysfunction and pro-industry bias. In doing so, he has effectively outlined a general theoretical apparatus that can guide empirical inquiry into how institutions within an industry produce technical or scientific misinformation that, in turn, creates larger narratives that protect harmful industrial operations.

While Hidden Scourge examines the dissemination of misinformation by large networks of institutions, which Timoney labels “meta-organizations,” their misinformation ultimately originates within individual organizations. And to understand how individual organizations produce misinformation, Timoney builds upon the analysis of David A. Bella, Professor Emeritus of Engineering at Oregon State University. Bella argues that the “distortion of information is often a systemic property of organizational processes sustained by basically good people.”  Organizational misinformation is not necessarily “the outcome of conscious intent or wilful deceit,” Timoney writes. Rather, it is what happens when information passes through “filters” that winnow the information, selecting and emphasizing the facts and interpretations that downplay the “risks, uncertainties, or impacts” of industrial operations. Ultimately, “a distorted view of reality becomes dogma.” 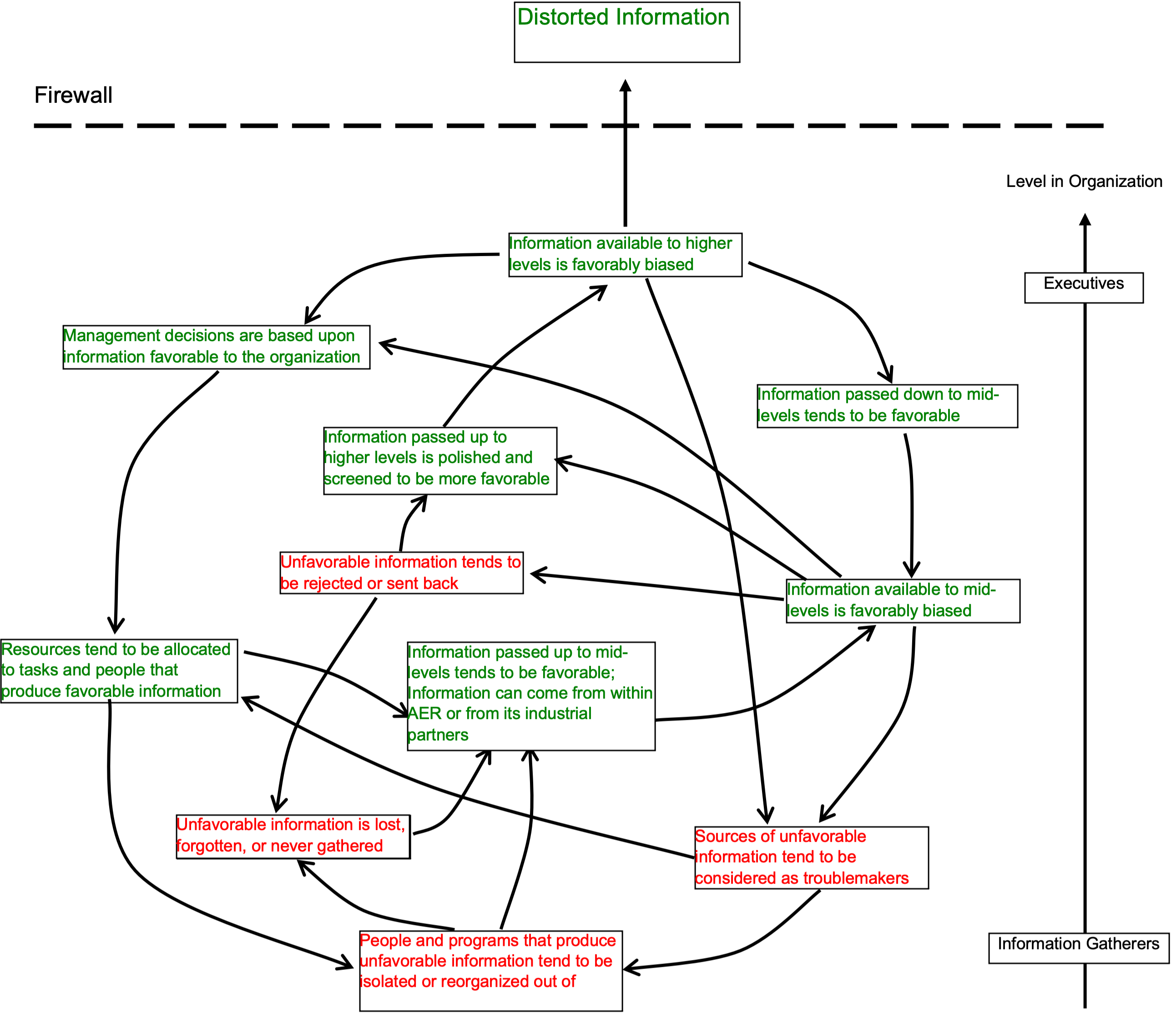 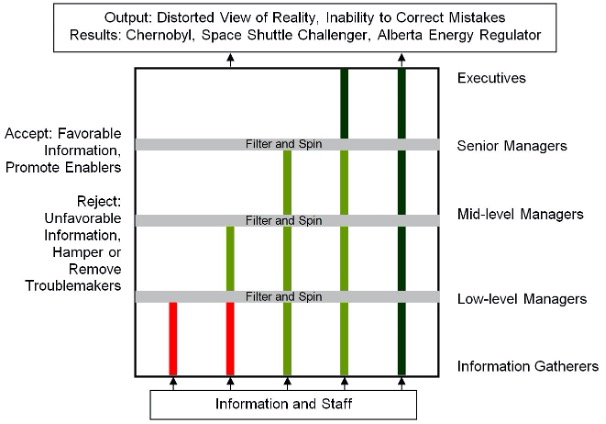 Figure 16.1. Information and personnel within an organization are subject to filtering at successive organizational levels. Only favorable information is released to the public and only enablers rise to the top (deep green). Troubling information and troublemakers (red) are rejected or filtered and spun to be favorable (green then deep green). Information distortion increases the probability of disastrous consequences. A gray-scale version of this figure was published as Figure 16.1 in Hidden Scourge (McGill-Queens University Press).

After establishing this general explanatory schema, Timoney applies it to the disarray within the Alberta Energy Regulator, showing how various systemic filters—from the subjectivity introduced by a lack of scientific rigour to managerial negligence and cognitive biases—distort data on spills. The data are often already distorted before they even reach the regulator, however. The regulator’s contribution of additional distortions to the data exemplifies a key dynamic of Timoney’s framework: the tendency of allied organizations to transmit and further distort each other’s misinformation.

Regarding the spills data, for example, Timoney argues that industry personnel cleaning up a spill often lack the technical skills and equipment to precisely measure how much of a substance was spilled. Under implicit pressure from management, they are prone to optimistically guesstimating that, say, 100 per cent of a spill was recovered when the actual volume recovered may well have been far lower. The company responsible for the spill would then report this biased guesstimate to the regulator, which perpetuates this misinformation by accepting it with little to no verification. It also then renders it more inaccurate by, for example, automatically recording that the spill did not occur in an ecologically sensitive area (a practice that Timoney exposes on page 115 of web materials he compiled to supplement his book).

The information exchanged between the regulator, fossil fuel producers, and the production-related companies with which they partner is the main source of information on the environmental impacts of fossil fuel production. This information is fenced off behind an “information firewall,” Timoney argues; it is only after the filters embedded within these institutions have spun this information that it circulates to the broader meta-organization, which Timoney describes as any network of institutions with shared interests that forms “whenever the prospects of large profits align with political power and the costs of exploitation can be shifted to the public.”

Among the members of a typical meta-organization are “enforcement, security, and surveillance” contractors, “financiers and insurers,” “political parties and governments captured by the industry,” as well as “lobby groups, think tanks … industry-funded universities and academics, and favoured media outlets.” Drawing on the terminology of the Corporate Mapping Project, Timoney categorizes many of these organizations as “enablers” or “legitimators,” terms that convey how industrial corporations can marshal different types of power, from the political clout and financial capital that concretely facilitate their on-the-ground operations, to the ideological influence over public discourse and cultural attitudes that justifies those operations even when they harm the public. 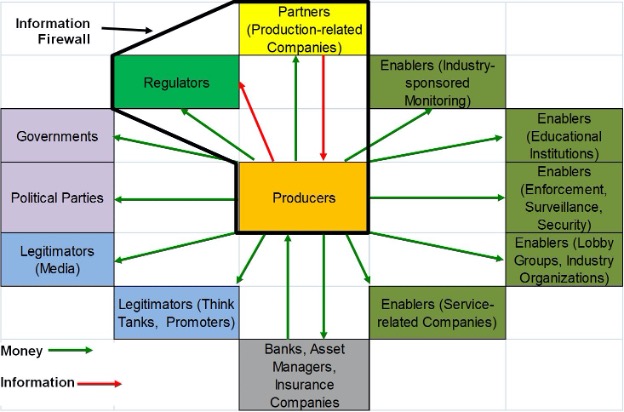 Figure 15.1. Components of the hydrocarbon meta-organization. A gray-scale version of this figure was published as Figure 15.1 in Hidden Scourge (McGill-Queens University Press).

Timoney’s conceptual framework offers important insights to observers of corporate and state power. For starters, he has consolidated relatively obscure terminology from disparate sources into a coherent framework that labels and describes the different parts of a common phenomenon: the emergence of constellations of organizations in different spheres of society that orbit around powerful industrial corporations. But in addition to helping us articulate the various aspects of this institutional formation, he also deepens our understanding of it by detailing the fundamental processes and dynamics by which it sometimes produces misinformation. Hidden Scourge therefore offers a systematically organized, diagrammatic schema that investigative journalists and others can use to frame and guide their interpretations of the particular institutional complexes they are analyzing.

Additionally, one must be mindful of how using the concept of the meta-organization to understand particular institutional formations implicitly casts the organizations under examination in a negative light; after all, the concept groups organizations into a network defined by its self-interested agenda and production of misinformation. While this adversarial perspective is not problematic per se, those employing Timoney’s framework must not slip into misusing it to dismiss claims and arguments originating from members of the meta-organization without fairly and impartially evaluating them. Though it is important to be skeptical towards assertions and analyses coming from such a meta-organization, researchers must still objectively assess their credibility on the strength of their evidence and reasoning, not pigeonhole them as presumptively nefarious spin.

Regardless of how the framework might be further refined, it is still an eye-opening analytical prism that enables us to better understand the misinformation arising from the intertwining of corporate and state power—misinformation that poses a serious threat to not only the effective stewardship of the natural world and its resources, but to the public’s right to know and, by extension, its capacity for intellectual freedom. 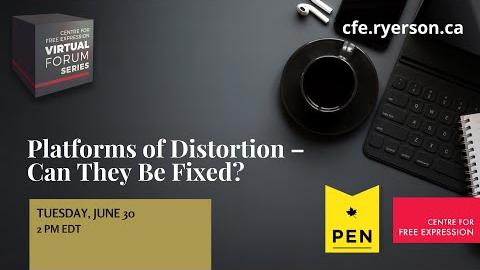 CFE Virtual Forum Series: Platforms of Distortion – Can They Be Fixed?

Making it illegal will not stop the spread of misinformation

As we have seen in recent elections and in the present pandemic, misinformation can do real harm.  But the Canadian government’s plan to consider legislation to criminalize the spreading of misinformation is the wrong response. Criminalization will not stop misinformation. In fact, it often draws more attention to it, as well as undermines civil liberties and human rights essential in a democratic society.

Freedom of Expression, Misinformation, and Anti-Vaxxers: The Right Thing to Do Is Not Obvious

As a parent of a small child, I’ve been to immunization clinics quite a bit over the past two years. During every visit, I’m curious to ask the public health nurses about the giant elephant in the room, at least as someone who researches freedom of expression issues: How do you satisfy your public health mandate at a time when vaccine skepticism or hesitancy seems to be on the rise?