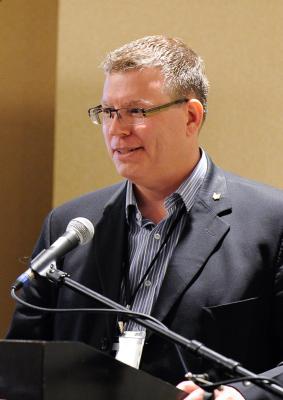 John Degen is Executive Director of The Writers’ Union of Canada (TWUC), and Chair of the International Authors Forum (IAF) in the UK – all together serving and representing over 650,000 authors worldwide. He is a poet and novelist with three published books. He has worked for many years as an arts administrator, arts funder and policy advocate on cultural issues. He is the previous Literature Officer at the Ontario Arts Council, where he administered a $4 million dollar funding budget for Ontario’s writers, publishers and literary presenters and was active in expanding the granting reach for that office into Ontario’s northern and indigenous communities. His essays and opinions have been published widely throughout Canada, including in The Globe and Mail, THIS Magazine, The Hill Times, Canadian Notes and Queries, and the Literary Review of Canada. He has served on many boards and advisories in the literary and arts sector including terms as Chair of the Book & Periodical Council, THIS Magazine and the Canadian Creators’ Coalition. He holds a Master’s Degree in Literature from the University of Toronto. His debut novel, The Uninvited Guest, was shortlisted for the 2006 Amazon.ca First Novel Award.

Engaged as I am in the endless fight to protect the rights of creative professionals, I spend way too much of my time reading ridiculous claims by folks who just want free stuff. Ask any writer, musician, artist of any kind; approximately four out of every five interactions around our work involves us explaining that we can’t work for free or give away the product of our work without compensation. The pressure for free cultural product is relentless and exhausting to those who are trying to make a living in culture.

Free Speech Caution Tape: Can We Trust Those Lines?

An easy mistake to make in any discussion of freedom of expression is to believe there is absolute certainty anywhere in the definition of that term. If you are jumping into a debate on free speech certain you know exactly what you believe (plus all the implications of that belief), chances are you’ve grossly over-estimated your own position. If you’re doing that on Twitter, either get your thumbs familiar with the block/mute functions, or free up a lot of time for an epic Twitter fight unlikely to solve anything for anyone.

Does Bailing Out Media Equal Controlling the Press?

John Degen
Freedom of the Press