The justice system is facing unprecedented challenges. Like almost every other sector of society, the new realities of province-wide “social distancing” have raised fundamental questions about whether — and perhaps even how — courts and tribunals can continue to function in the age of the pandemic.

In the immediate aftermath of social distancing, the business of Ontario courtrooms essentially ground to a halt, with a small number of exceptions for COVID-19 related matters, child protection issues, certain criminal law appearances and other extremely urgent issues.

Yet as it becomes clear that the pandemic’s disruptive impact will likely last for several months, it is equally clear that the justice system will have to get back up-and-running before social distancing becomes a thing of the past.  The first move in this direction came just last Friday, when the Chief Justice of Ontario’s Superior Court of Justice indicated that he would be releasing a plan for a “virtual court expansion” in the next few days, recognizing that the court “has a constitutional responsibility to ensure access to justice remains available.”

The Supreme Court of Canada has held that the “open court principle” is a “hallmark of democratic society” that “gains importance from its clear association with free expression protected by s. 2(b) of the Charter.”  The Court went on to explain that “[o]pen courts have several distinct benefits.  Public access to the courts allows anyone who cares to know the opportunity to see that justice is administered in a non-arbitrary manner, according to the rule of law.  An open court is more likely to be an independent and impartial court.  Justice seen to be done is in that way justice more likely to be done.  The openness of our courts is a “principal component” of their legitimacy.”

The open court principle applies not just to the courts, but to adjudicative tribunals as well. Indeed, there may be a heightened interest in such tribunal proceedings over the coming months as the implications of the pandemic begin to percolate through society — for example, discipline hearings for regulated health professionals, human rights proceedings and workplace safety and insurance board hearings.  And just as the courts are preparing for a shift to virtual hearings, we can expect that tribunals will do the same.  The Ontario government has already passed new legislation designed to make it easier for tribunals to conduct virtual hearings.

Understandably, ensuring that the open court principle is respected throughout the COVID-19 crisis may not be at the top of the agenda for those charged with finding a way to keep the justice system functioning.  The sheer challenge of bringing such an antiquated civil justice system — one still relies on the service of documents by fax rather than email, and requires in-person attendances for most routine scheduling matters — looms large.

But as new technological solutions and protocols are developed for what may be many months of virtual hearings, it is critical that the open court principle be part of the design and implementation process.

Practically speaking, what does this mean?

First, courts and tribunals must ensure that the listing information for all virtual hearings is available online.  Most tribunals and civil courts already list upcoming hearings electronically, but without the ability for inquiring minds to physically attend courthouses and check the daily court lists or dockets to see what is scheduled to be heard, there is a heightened need to ensure listing information is provided comprehensively and at least 24 hours in advance of the hearing date.

Second, the public must be granted some kind of access to virtual hearings.  There are different ways to achieve this objective.  For more routine hearings conducted over videoconference or teleconference, a protocol could be established where the media or members of the public could request access to view or listen to the hearing, with permission being granted to a certain number of users on a first-come, first-served basis.  (Certain videoconference platforms are able to accommodate this kind of “viewer” status, without granting them participatory rights.)  For matters where there is likely to be a broader public interest, arrangements could be made to webcast the virtual hearing as it is unfolding so that it can be viewed by anyone with a link to the webcast website.

At a minimum, if neither of the foregoing options are practical or technically feasible for a particular hearing, then the hearing ought to be recorded and made available upon request — an approach that appears to be the favoured solution in the United Kingdom.

Third, a protocol should be established to allow members of the media and the public to access public documents filed in connection with a particular hearing, upon request.  Since the courts physically closed down, most courthouses have started accepting filing of documents electronically, meaning that — at least for these more recent documents — such requests could be relatively easily accommodated.  It would simply be a matter of sending the requester a copy of the PDF document that was filed.

Older documents that do not exist electronically in the court’s filing system present a harder problem. It will likely be impractical, if not impossible, for court staff to provide scanned copies upon request — especially if most court staff are not physically onsite due to social distancing. But at least for those cases that attract significant public and media attention, consideration should be given to solutions like requesting that counsel provide electronic copies of previously filed records, so that they may be more easily shared with members of the public.

Ultimately, the shift from physical to virtual hearings will present many practical, logistical and technical challenges for courts and tribunals alike.  So too will ensuring the open court principle is respected for those hearings.  But if our justice system is going to function not just effectively but transparently in a world of social distancing, then these challenges must be met. 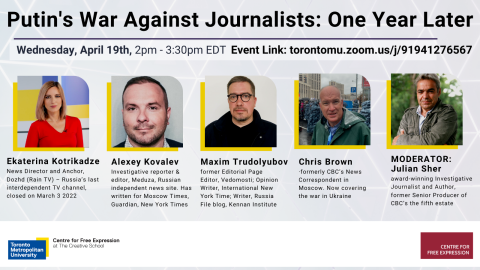 So far, this blog series has commented on City of Toronto v. Ontario (2021) and Ward v. Quebec (2021); offered a quantitative and qualitative synopsis of the s.2(b) case law; provided a critique of Irwin Toy and the contextual approach; and addressed the Supreme Court of Canada’s jurisprudence on the open court principle and freedom of the press and media. Even so, when complete the series will still leave much unsaid about s.2(b) and its challenges.